Wunna Theikdi Sport Complex will finish at May 2013

Since it’s inception in 1993, Max Myanmar Group has based it’s businesses in trading, construction, agriculture and livestock and fisheries. The group has properly compensated the farmers when acquiring land for development use obtained legally and in accordance with the laws, rules and regulations of the previous government. The Group never forces, influence high authorities in obtaining nor confiscate land, which will not be beneficial to the original landowners/farmers.

Now, with the changing times and many reforms being done in building a new democratic nation, Max Myanmar, also with the changing tides is making it’s best efforts in giving a helping hand to the local populace their equal rights to live, uplifting their living standards and alleviating poverty. To implement the aforementioned criteria, the Group has yet again given additional compensation to the farmers who think that they are not properly compensated to their fullest. Moreover, to the farmers who wanted to work and retain their ownership rights, their lands were given back in accordance with the existing land laws and ownership rights with proper documentations. Furthermore, the Group is proactive in development of education, health and social sectors of the areas it is active in by building and donating hospitals, clinics, schools and providing funds for education sector.

Even before a legalized La Na (39) (a legalized document for the rightful ownership of land use) was obtained on (15-1-2012) from the government, Max Myanmar Group has compensated a designated amount of Kyats 45000 per acre to the local farmers for their loss of crops on the acquired land.

But since the local farmers desirous of making their own living appealed to have the land back, and since Max Myanmar desirous of fulfilling the needs and wants of the local people and to uplift their living standards, the (45.29 acres) of land was being compensated to the original (12) farmers along with the original La Na (39) (a legalized document for the rightful ownership of land use) along with the copy of the deeds to the land with the approval of Ayeyarwady Region Government on 23-5-2013.

Since the new democratic government has taken its responsibilities in 2011, and more transparency is seen in people-to-people contact, Max Myanmar was again approached by the local land/farm owners for their grievances. In order to fulfill the desire of the local populace, Max Myanmar met and negotiated (8) times with the representatives from local landowners/ farmers, local NGOs and came to an agreement.

Max Myanmar Group started its rubber plantation operations in Belin starting from 2005-06 financial year. With its yearly expansion of plantation areas, the Group has bought, compensated and reimbursed funds accordingly to the local populace in the following ways.

With the aim to develop the agriculture sector to a mechanized farming, under the guidance of the previous government, Max Myanmar Group obtained a license and a lease agreement from Department of Human Settlement and Housing Development on (23-6-2009) to run a mechanized farming project in Dagon Seikkan Township.

A Donation to schools from Chaung Tha Village Group Region 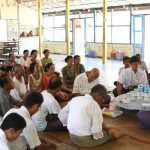 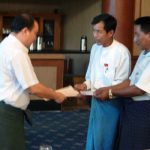 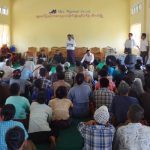 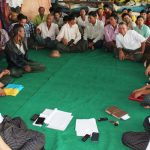